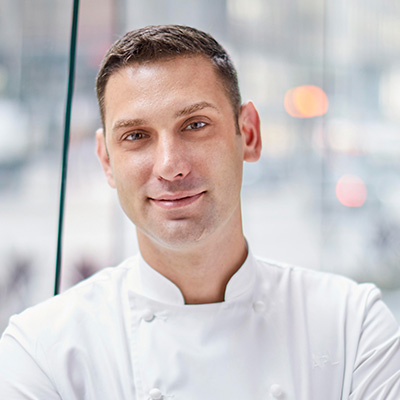 ● Oversaw development of all menus while mentoring my talented sous team to become executive chefs in their own right.

● Supervised all BOH operations – lunch, brunch & dinner service as well as private events up to 300 people in the 3 large event spaces.

● Oversaw development of all menus while encouraging our large team to participate, grow & develop together.

● Was involved from an early planning stage to oversee the kitchen build out.

● Supervised all BOH operations – dinner service as well as a late-night menu to help sustain & retain the nightlife crowd into the early morning hours.

● Oversaw development of all menus – dinner and late at night.

● Was involved from an early planning stage to oversee the kitchen build out.

Born & raised in the suburbs of Chicago, I grew up with a healthy curiosity for cooking that was encouraged by my mom, who gave me my first cookbook when I was 6 years old. I found my way into elite kitchens in Chicago proper at the age of 17. Prior to Celeste, I opened Acadia as the Sous Chef & before that, I collected all of the knowledge I could while cooking in various positions at MK, Amano, Bin 36, Duchamp, & a few more top kitchens around Chicago.

A perk of cooking in the same city your whole career is the abundance of connections made over the years with regard to staffing and vendor relationships. I have made many connections with exceptional teammates in both front & back of house & I could easily provide a cohesive opening team from upper management to dishwashers. Over my 15 years – in some of the best kitchens in Chicago – I have acquired a complete knowledge of all food, liquor, smallware, and tabletop vendors that operate within the city.

Working for Union Square Hospitality Group for the past few years has expanded my knowledge of business systems & operations in the kitchen & beyond. Through the guidance of Union Square Events, I have learned the ins & outs of catering operations as well as how to execute high-level events. Additionally, I have been asked to participate in every major culinary charity event in the city over the past 4 years & have a great relationship with many media outlets.