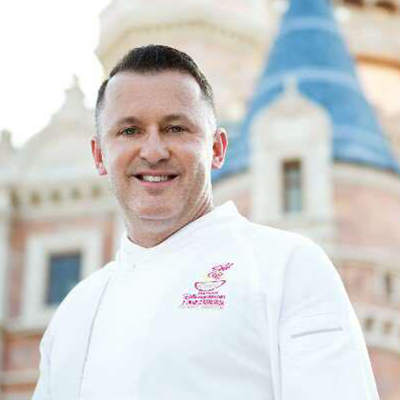 Alan Orreal
The Director of Culinary

The Director of Culinary at Shanghai Disney Resort where he is spearheading the operation in terms of dining options across the mega resort, Alan Orreal is the very essence of borderless and dynamic modern-day chef. He is the Vice-Chairman of the World Association of Chefs Societies committee for the Global Development of Young Chefs and a WACS-approved judge in addition to being a Honorary Professor at SIT and guest lecturer at food collages across Asia, a TV host and judge of a television reality show that uplifts the lives of underprivileged and homeless teens through education and cooking.

Born in Australia, Chef Alan Orreal has lived and worked in Asia for most of his 34 years in the culinary industry, which included stints in a variety of establishments ranging from five-star hotels, airline catering, and fine dining restaurants in Singapore, Taiwan, Sri Lanka and Australia. His style of cuisine which can only be described as modern global cuisine is a reflection his dynamic and borderless outlook to his profession.

Chef Alan’s influences are driven very much from the great chefs that he has trained under, including Cheong Liew, Tony Bilson, Otto Weibel and Peter Knipp. Individually, Alan has carried away coveted trophies and medals from numerous culinary events including coaching responsibilities for the National Culinary Teams for both China and Japan to compete in the Culinary Olympics and is without doubt one of the most celebrated culinary professionals in the world today.