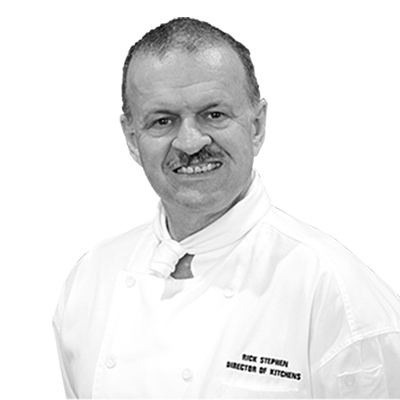 Rick Stephen is a 3rd generation chef and hails from the food capital of Australia –Tasmania. He is also the first Australian to be awarded the ‘Certified Master Chef’.

He started his apprenticeship in 1972 under world-renowned chef Claudio Magris in Melbourne who was specially brought in to Australia for the 1956 Olympics.

Rick owned and ran Raphael’s restaurant in Brisbane for 12 years and was able to achieve 3 Chefs Hats which is the highest rating a restaurant can be awarded in Australia.

In 2009, Rick started at SATS Ltd in Singapore as the Executive Chef for the Inflight Catering Centre 1 (ICC1), catering to Singapore Airlines in the vicinity of 50-60,000 meals per day.

In 2015, Rick was promoted to Director of Kitchens to oversee the running of all of the SATS kitchens which encompasses ICC1, ICC2, SATS Food Services (which includes Defence, Educare and Medicare catering) and the Sportshub.

As the Company’s group head chef (i.e. Director of Kitchens), there are 14 other kitchens throughout Asia that he needs to oversee. These kitchens consolidated produces a total of 400,000 meals per day.

Besides Rick’s involvement with SATS, he is also the Continental Director for WorldChefs in Asia. Near every second weekend, you will find Rick travelling to various parts of Asia – conducting various training sessions, mini masterclasses or even doing motivation presentation to young chefs. To date, he has 21 countries under his belt which he personally attends to.

Rick has been honored in a number of countries and has a school wing of the NingbBo Culinary School named after him as the Rick Stephen’s Centre of Excellence, in NingBo China. This is here where he see the future for the young chefs with training and education in the Culinary Arts.

He has coached and mentored many National Culinary Teams for international competitons, including the Singapore, Japan, Thailand, Malaysia and China. He has also recently trained the Chinese candidates to WorldSkills in western cuisine and they came in top 3.

He is the author of ‘Kitchen 241’ cookbook and ‘The Art of judging’. Besides writing countless delectable recipes, he is also the food coordinator for the multiple award winning book – ‘Food around the World’. Rick is no stranger to the media as he has been involved in many Food Lifestyle television programs and documentaries on food.

Rick’s philosophy has always been about sharing information, supporting the white coat that he is proud to wear every day and to promote the young chefs who are the future of the culinary profession.