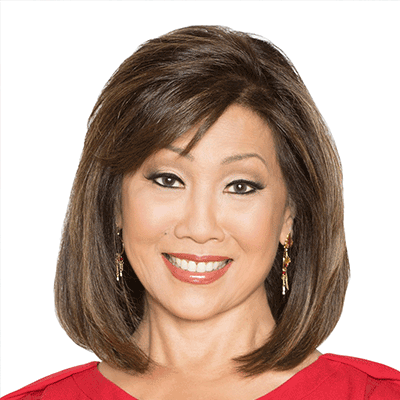 Linda Yu has been called a trailblazer, mentor and award-winning journalist.  She recently stepped back from daily broadcasting after more than forty years in television news.

Yu began her career in 1974 as a writer for the Los Angeles ABC station KABC-TV and then went on to become a writer/producer at KTLA-TV.  In 1975 she stepped in front of the camera as a reporter for the ABC affiliate station in Portland, Oregon KATU-TV.  Within months, she received an offer from ABC owned station KGO-TV in San Francisco as reporter and anchor, where Yu worked from 1976 to 1979.

In late 1979, she was spotted by the NBC owned station in Chicago, WMAQ-TV, and moved to the Windy City as weekend anchor and reporter.  Part of Yu’s motivation for accepting the position was that she would be the first Asian American to appear on a Chicago network station.   Five years later, ABC won her back and she moved to Chicago’s ABC7, WLS-TV, to anchor the station’s newly created 4 p.m. news hour.  Later, an 11 a.m. news hour was added to her anchor duties.  Both news programs maintained their number one rating throughout her 33 year career at ABC7.

Among the honors and recognition for Yu are six local Emmy awards, as well as induction into the prestigious “Silver Circle” of legendary Chicago broadcasters.  She has been named one of Today’s Chicago Women magazine’s “100 Women to Watch” and has been awarded a National Gold Medal by the National Conference of Community and Justice.

In her community service, Yu spent more than 30 years as the Advisory Board Chairperson for the Chinese American Service League.  She is also a co-founder of the Chicago chapter of the Asian American Journalists Association.  She has been an active supporter and volunteer for Common Threads, the Juvenile Protective Association and the March of Dimes.

Yu is the author of  “Living and Working in America”, a book published in Chinese and sold in China.