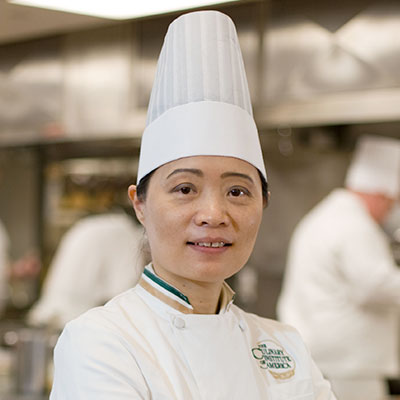 Shirley Cheng is a professor of culinary arts at The Culinary Institute of America. Chef Cheng teaches Cuisines and Cultures of Asia in the college’s degree programs. Chef Cheng’s students prepare, taste, serve, and evaluate traditional, regional dishes of Asia. Emphasis is placed on ingredients, flavor profiles, preparations, and techniques representative of the cuisines of China, Korea, Japan, Vietnam, Thailand, and India. Her course also develops an expanded understanding and appreciation of why and how people from diverse world cultures with varying backgrounds approach food and beverages differently.

Chef Cheng earned an associate degree from Sichuan Culinary Institute, Sichuan, and People’s Republic of China; a Bachelor of Arts from Sichuan University; and a Master of Science in Hospitality Administration from Johnson & Wales, Providence, RI.

Today, with 39 years of experience in the food industry and in culinary education, she is an accomplished and respected professor in Asian cuisine, with a specialization in the Sichuan regional cuisine of China.

Named CIA Faculty Member of the Year in 1996, Chef Cheng has judged several Master Chef Exams at the college, and was a member of the CIA team that won the coveted Marc Sarrazin Cup at the Salon of Culinary Arts in New York in 1996 and 1997. She was the gold winner of Japanese Ingredient Culinary Challenge Recipe Competition in NY 2011.

Chef Cheng has had numerous articles appear in culinary and educational publications, both nationally and internationally, including Plate and Global Cuisine magazines. She has also been interviewed as a special consultant for Chinese, Korean, Japanese, Vietnamese, and American publications on topics ranging from flavor profiles to the future of culinary education. In addition to making several conference presentations, Chef Cheng is featured in a number of instructional and culinary competition videos broadcast on PBS, Epicurious.com, and Food Network.
Her current two research projects are grant-supported examination of the production of Huajiao, its culinary application in Sichuan cuisine, and its acceptance among American consumers and chefs, also consumer acceptance of the Mala flavor profile and applications for sodium reduction strategies.